We are using all cleaning procedures and facility procedures for social distancing as recommended by the CDC.

Meet the experienced and friendly doctors and staff who make Whitney Family Eyecare the leading provider of vision care products and services in Whitney. 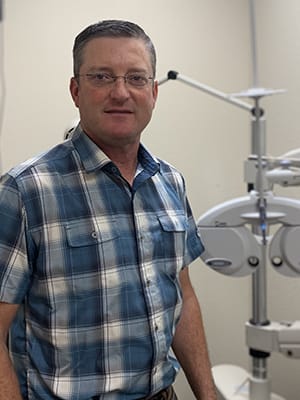 I am a native of Whitney, Texas and a Whitney High School graduate. From there I attended Texas A&M University where I graduated in 1991 with a BS degree in Biomedical Science. I had known since early childhood that I wanted to be an optometrist after getting my first pair of glasses and so I then attended University of Houston College of Optometry where I graduated Magna Cum Laude and obtained licensure in 1995. I immediately opened my practice, Whitney Family Eyecare, in 1995 where I continue to practice today. I love serving the community in which I grew up and where my family has such strong ties. My hope is to give back to those who have given so much to me.

When away from the office I spend a lot of time on Lake Whitney bass fishing or just enjoying the lake with family. I also enjoy deer hunting and mix in an occasional round of golf at White Bluff Resort.

Dr. Andréa Adeyemi (pronounced I-D-M-E), or “Dr. A”, is new to the central Texas area. She grew up in Covington, GA and relocated to Waco, TX in 2022. She graduated from Georgia College & State University in 2009 with a Bachelor of Science degree in Biology, and received her Doctorate of Optometry in 2015 from Indiana University in Bloomington, IN. She completed her externships at WBJ Dorn VA Hospital in Columbia, SC, Naval Health Clinic in Quantico, VA, Atwater Eye Care Center in Bloomington, IN, and the Indianapolis Eye Care Center in Indianapolis, IN.

Dr. A has been in practice for 7 years, and lived in the middle GA area for almost 10 years. She is married to Dr. Justin Adeyemi, an educator at Baylor University. In her spare time, she enjoys spending time with family and friends, serving at Highland Baptist Church, and professional basketball.

You can schedule your next eye exam with us online!

Leave Us a Review

Please take a moment and let us know how your experience was.